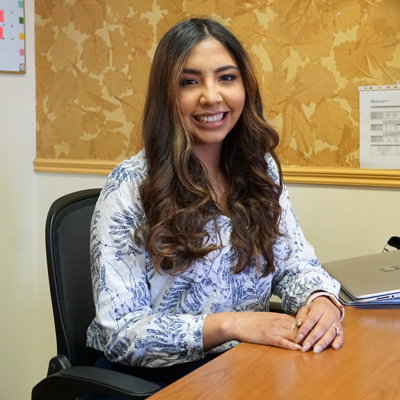 While growing up in Zacatecas, Mexico, Lupita Ayala Montenez knew she wanted to make a living by helping people.

“I wanted to be a doctor, nurse, police officer or a lawyer,” said Ayala Montenez. “I wanted to help those that can’t help themselves.”

After emigrating to the United States and while attending Grand Island Senior High School, Ayala Montenez went to a college fair at Fonner Park. That’s where she met CCC recruiting coordinator Maria Lopez, who put her at ease because she spoke Spanish.

“Finally, I could ask someone all of the questions I had not been asking because I didn’t know how to,” Ayala Montenez recalled.

Ayala Montenez credits Lopez for guiding her through financial aid and all the services that CCC provides. She was intent on majoring in nursing, but after deeper conversations, Lopez mentioned another possibility. “She talked to me about human services, which fit perfectly with what I wanted to do,” said Ayala Montenez.

As part of her degree path, Ayala Montenez had to complete a practicum at a community agency. That’s when she got involved with the Multicultural Coalition, a nonprofit organization that seeks to empower individuals to overcome barriers to basic needs. Her practicum experience eventually led to a full-time position at the coalition, where she remains as a client advocate.

Ayala Montenez, who is an accredited U.S. Department of Justice representative, said the most rewarding thing about her work is seeing the change in her clients, such as when they become U.S. citizens.

“When they get their pictures taken (after earning citizenship), they look like it’s their graduation,” Ayala Montanez said. “You see their confidence go up.”

In addition to working full-time, Ayala Montanez is pursuing a bachelor’s degree at Bellevue University in behavioral science and may seek a master’s degree in counseling, also at Bellevue. However, if she had her way, she would earn all her degrees where it began.

“If I could, I would go back to CCC,” said Ayala Montenez.