Spectrum Performs in Austria and the Czech Republic

Spectrum, the select musical ensemble at Central Community College-Columbus, can add two more countries to its international travelogue. For ten days in June, the 19 members of Spectrum performed multiple concerts in cities Austria and the Czech Republic. Along with the small number of CCC staffers that accompanied the choir, group members did a lot of sightseeing as well.

The first stop was Salzburg, Austria, where Spectrum performed an exchange concert with a children’s choir in Amadeus Mozart’s hometown. Some of the sites visited included the church that was used in the wedding scene in “The Sound of Music” and Mozart’s birthplace. In fact, the group stood in the room where Mozart was born and saw his first violin.

Vienna was the next stop, where Spectrum members were part of a mass choir that performed Mozart’sRequiem at the Votivkirche (the Candle Church). One of the sightseeing highlights in Vienna was Central Cemetery, which contains the graves of such famous composers as Ludwig van Beethoven, Johannes Brahms and Franz Schubert.

The final stop was Prague, where Spectrum performed a concert at St. Nicholas Church. It was there that Spectrum director Jeff Kitson said he had a most unusual encounter.

“Funny enough, the people sitting next to me at the concert randomly were from O’Neill, Nebraska,” said Kitson. “I just happened to be sitting in an empty pew and they were tourists who just happened to walk into the free concert. 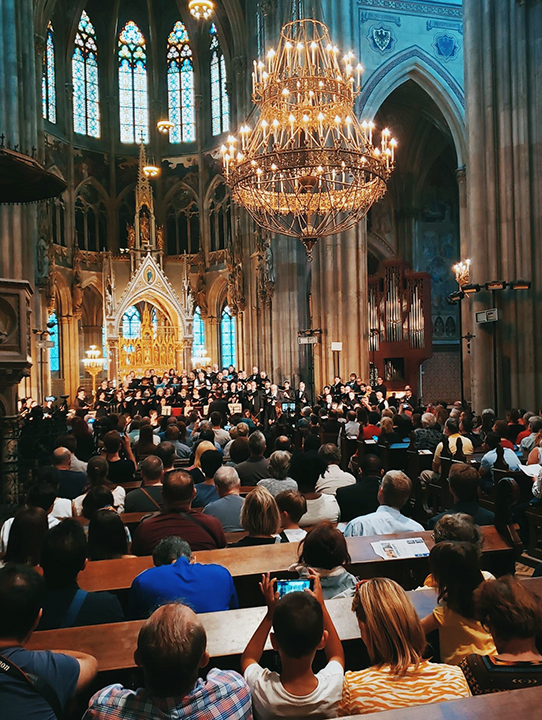 “Absolutely beautiful,” is how Spectrum member Ally Phillips described the sights she saw while in Europe. She has family in Germany and friends that have traveled to Europe before her. When asked what her favorite part of the trip was, she said it was seeing the architecture of the cathedrals.

“The cathedrals are larger than I could ever possibly imagine, and detailed with so many statues,” said Phillips. “Seeing and singing in the Votivkirche in person was absolutely incredible.”

“We all just started crying,” said Ernst. “So many people came up to us and said they completely understood what it must feel like to have this be the last time to be singing together. It was just real cool to see other people appreciate how much we love what we do.”

In recent years, Spectrum has also traveled to Greece and Italy.