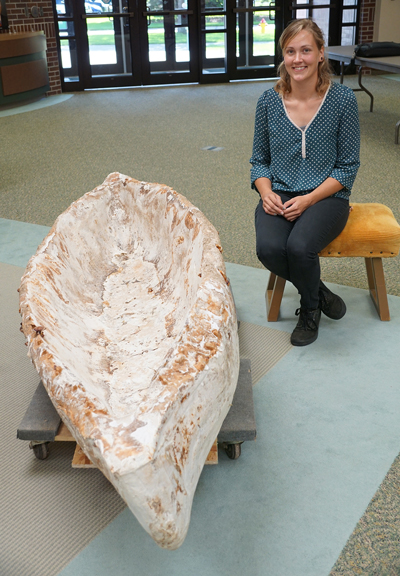 Katy Ayers and her mushroom canoe are in high demand these days when it comes to the media. Ayers is the CCC-Columbus student who constructed the floating fungi canoe in summer 2019.

First, a local newspaper produced a feature story before the Nebraska State Fair where Ayers was scheduled to give a presentation at the sustainability pavilion. However, heavy rains and flooding pulled the plug. A few months later, Ayers’ story went viral when she joined a fungal materials and bio-fabrication Facebook page.

In February, CCC was contacted by Sarah Kuta, a Denver-based freelance writer and Grand Island native, who wanted to interview Ayers for a story to be posted on one of the digital platforms of NBC News. As is sometimes the case with national stories, it was a waiting game after the interview. Kuta’s story was finally posted on the main NBC News website in late April.

Almost immediately, CCC was contacted by Toronto-based Cottage Life magazine, which published an article on April 29. The London-based Daily Mail newspaper produced a story about Ayers and her canoe, which was a compilation of articles from Nebraska-based newspapers.

With all the interviews she conducts, one thing she is quick to point out is that she is not an expert.

Recently, Ayers has been contacted by various companies to be a guest speaker as part of staff enrichment activities. Whether it be media platforms or on the guest speaker circuit, Ayers has a goal in mind when she delivers her message.

“I really hope that I can use it as a scientific communication tool to show people what they can do,” said Ayers, who specifically wants to inspire young people to get involved in STEM (science, technology, engineering and mathematics) fields.

Ayers has kept a level head throughout all the publicity and press but still is nervous about it all.

“I’m just a community college student,” said Ayers. “I don’t feel like I deserve all this recognition, but here it is.”