Attention! Due to winter weather conditions, all CCC campuses and centers will be closed on Tuesday, Jan. 26. - ** Coronavirus Updates and Information

In response to President Obama’s call to increase the number of graduates by 50 percent by 2020, on Sept. 9, 2010, the presidents of AACC and ACCT asked member CEOs and board chairs to encourage community colleges to support the completion agenda by increasing the number of students who complete degrees, certificates and other credentials with value in the workplace. This effort was labeled the “College Completion Challenge: A Call to Action.” CCC was among the first 25 signatories and is one of only 71 out of the 1,132 community colleges to ever accept the challenge. We believe that CCC is the only institution to report our progress to AACC and annually to our Board of Governors and other stakeholders. As of 2014-15, CCC was where it projected to be in 2018-19 with regard to increases in the number of graduates and the number of credentials awarded.

Unduplicated Graduates by Year vs. 150% Goal

Duplicated Graduates by Year vs. 150% Goal

In 2019-2020 the number of duplicated graduates exceeded the project goal set during 2008’s Call to Action. While still lower than previous years, CCC has increased its duplicated number of graduates substantially since 2008-09. 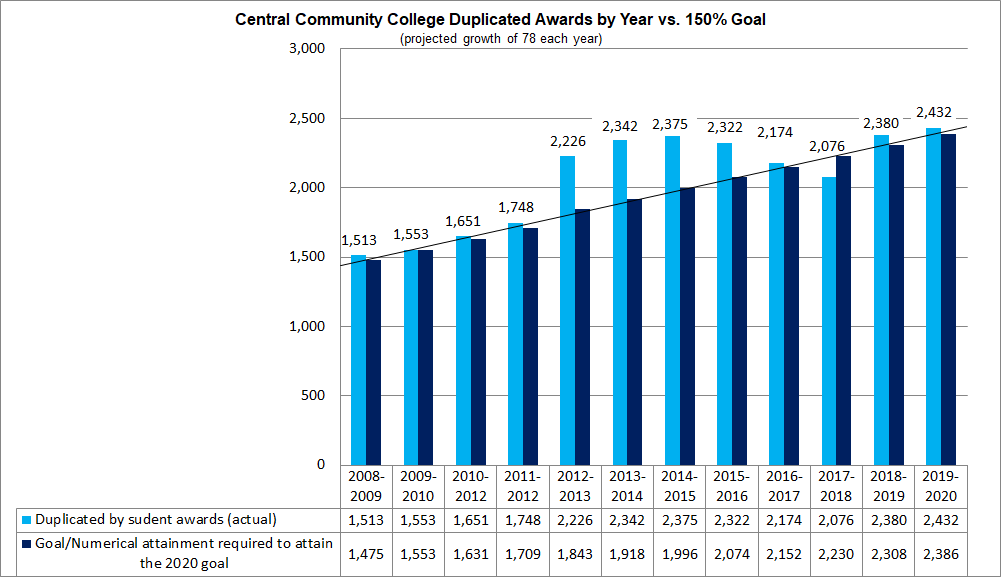